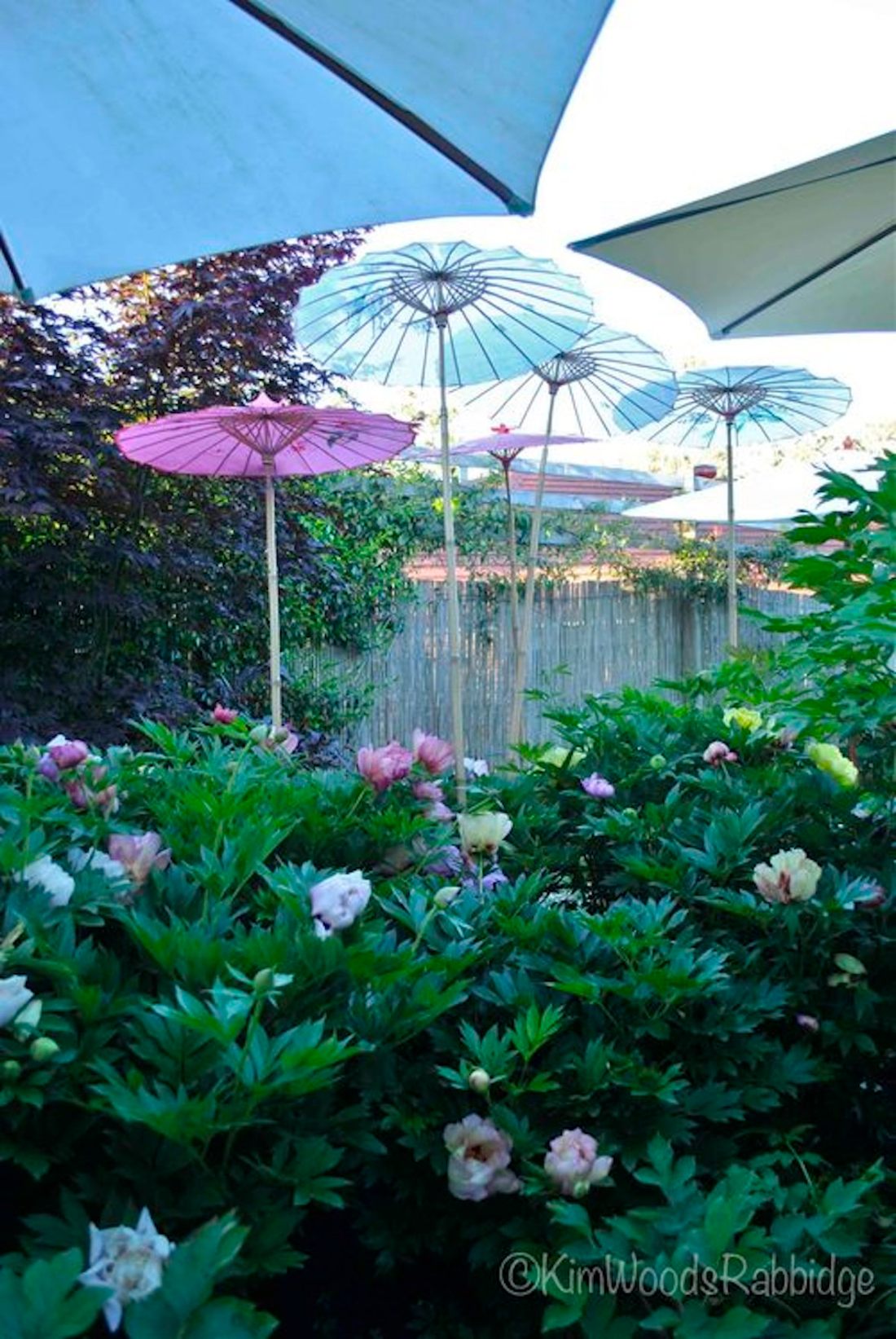 (Please note: as this blog has been transferred from our old website some images are low resolution.)

Tucked away behind a storybook cottage along a sleepy back street of Mittagong, in the Southern Highlands of New South Wales, is an enchanting garden.

Acer palmatum ‘Atropurpureum’ and on the right, Acer palmatum ‘Senkaki’ aka coral bark maple, are attractive small deciduous trees in front of the cottage. Toparied balls of box honeysuckle line the drive.

The property, named Chinoiserie, is the home of Chris Styles and Dominic Wong. Fifteen years ago, when Dominic began drawing up a garden plan while their house was being built, there wasn’t even one tree on the place. 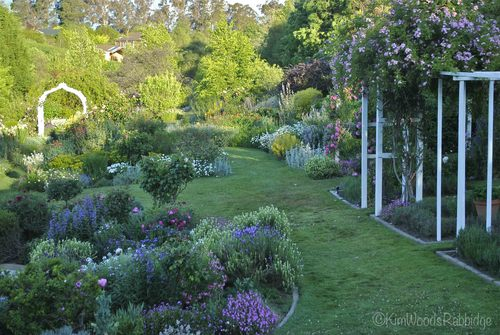 They run a Bed and Breakfast so Dominic says it was important to plan the garden to be seen from the dining room. A clever idea as winters are very chilly so visitors are able to appreciate the garden in cosy comfort.

Clusters of the deliciously sweet rose ‘Mme Grégoire Staechelin’ tumble over an arbour.

Peony ‘Cora Louise’ starring in the limelight is ‘intersectional’ – that’s a cross between a herbaceous and tree peony. Behind are mauve blooms – ‘Luxuriant’ by name and nature.

The yellow intersectional ‘Bartzella’ is another hybrid – and very vivacious.

Behind the opium poppies is the mysterious, moody rose ‘Rhapsody in Blue’.

Previously while living in Sydney, Dominic practiced his horticultural skills on a 500sm block – and as much of the nature strip he dared claim. His early garden featured drought tolerant plants surrounding a Californian bungalow. Even there, on a compact patch his garden drew attention of horticultural identities such as Don Burke, who filmed it in 1996. 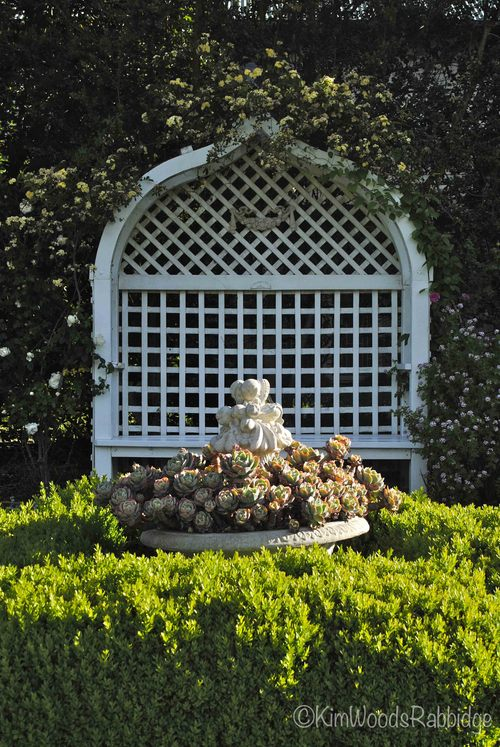 A move to the Southern Highlands offered Dominic a chance to indulge his passion and with much more space, planting possibilities seemed endless. A larger property though meant more lawn, so Chris helps with mowing.

A fresh colour play in mint, grey, lime and lemon… stachys, euphorbias and tree lupins are amongst the stars. 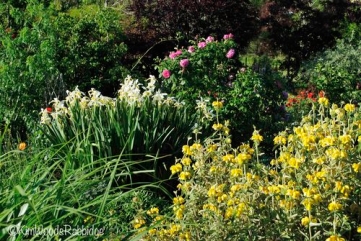 Bred especially for a church, ‘Blooming Miracle’ must have raised some healthy funds.

A north-facing chook boudoir is softened with mounds of lilac and white pig face.

‘Complicata’ is an old-fashioned rose that flushes in spring.

“I have loved peonies since I was a child in Malaysia,”  Dominic says. “My mother was from China and it’s the national flower, so the motif was quite familiar.

Dominic explains that in early Chinese dynasties only the Emperor could grow peonies, so during the Cultural Revolution Mao wanted them all destroyed as he associated them with the royal family. Luckily, monks growing peonies in monasteries told him that the roots were used as medicine to purify the blood, and for women’s problems so thankfully the peonies were saved!
image

Have you ever seen a Peony Pavilion? Here’s one – it was inspired by a visit to China. 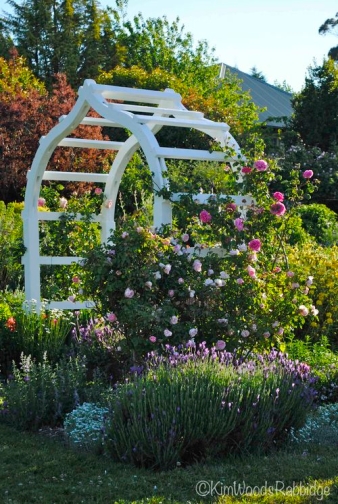 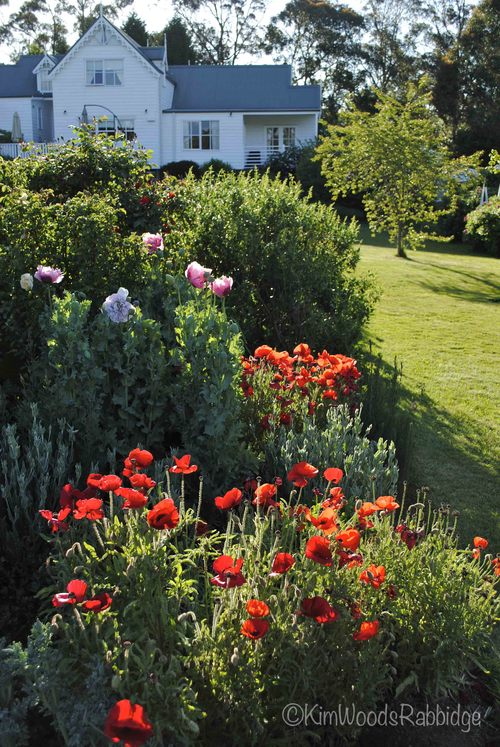 Glowing in the afternoon sun: an orange Pat Austin and ‘Blooming Miracle’ alongside the delicate but vivid David Austin ‘Red Coat’ 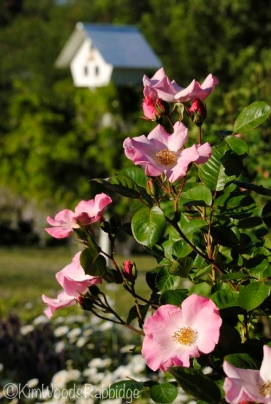 Deep pink buds are punctuation points amongst the single blooms of ‘Sparrieshoop’.

So simple: silene spills from a barrow.

Deliciously scented – and coloured – hybrid rogusa ‘Rugspin’ has wonderful foliage and is a lush companion around the tuteurs.

Herbaceous peonies need frosts on the crown for at least three weeks. Tree peonies can be grown in slightly more temperate climes such as Toowoomba – and even warmer Sydney. 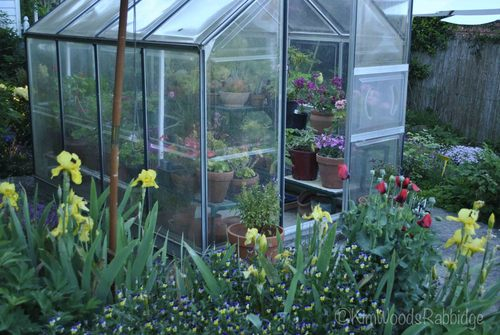 Dominic and Chris’s garden is unashamedly abundant with joy. Keep an eye out for when it opens – or just book in for a weekend at  Chinoiserie if you’d like a shot of beauty.

Gorgeous garden! I thought I recognised the name Dominic Wong from a garden I saw in the inner west years ago.

You certainly….
Get to see some fabulous places/gardens.
Take some wonderful photos.
Thanks for sending them thru.
Euan Murdoch
Queensland