Recently I visited MIFGS in the Carlton Gardens, Melbourne where the garden designers excelled – what a feast for the eyes!

(Please note: as this blog has been transferred from our old website some images are low resolution.)

This is ‘The Patriarch’s Garden’ by Cycas Landscape Design which won the CITY OF MELBOURNE AWARD OF EXCELLENCE FOR BEST IN SHOW. Some pics were taken in the day – the others in the evening.

To combine so many strong features in one setting, with such harmony, was a huge achievement. 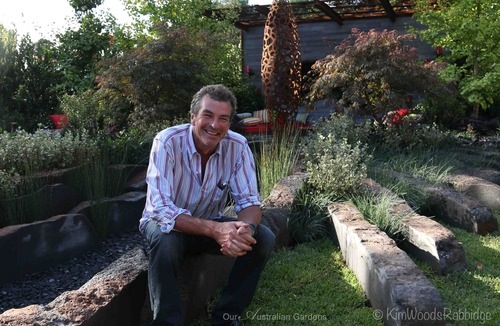 In his superb ‘monumental’ garden designer Mark Browning, above, honours his late father, and celebrates ‘family and friends, and associations’.

These images below are from a very popular Gold Show Garden that inspired in so many ways. ‘The Gardener’s Library – Aspiration’ designed by Vivid Design, husband and wife team Joby and Carolyn Blackman, and built by Semken Landscaping was a collaboration between eight of Melbourne’s best nurseries.

“If you have a garden and a library, you have everything you need.”

The elegant library was constructed in Ireland, and the lattice custom-made. This project was a credit to all who contributed – especially the independent nurseries competing with large hardware stores who often control/limit the palette of plants available to customers.

Adjacent to the front of the main display a raised bed was brimful with a cool palette of perennials and annuals. 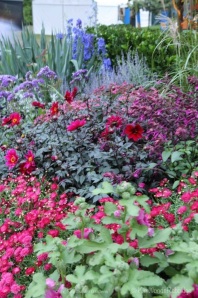 Splashes of deep pinks and cool reds reinforced the profusion of Big Red pelargoniums either side of the reflection pool.

Maples and birch, either side of the display were underplanted with hydrangeas, hellebores, loropetulam, Pieris japonica and more… It was a clever ploy using several layers to give depth to this display. 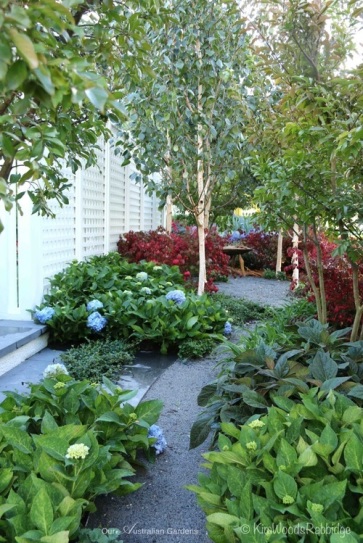 Almost hidden in a side garden, hand-furled timber cones reinforce the bespoke nature of the stool on which they’re placed.

We took a sneak peak inside with one of the judges at night; of course it was totally transformed and quite enchanting.

You could imagine looking out while enjoying an evening drink – and despite all the colour, an air of serenity pervaded. 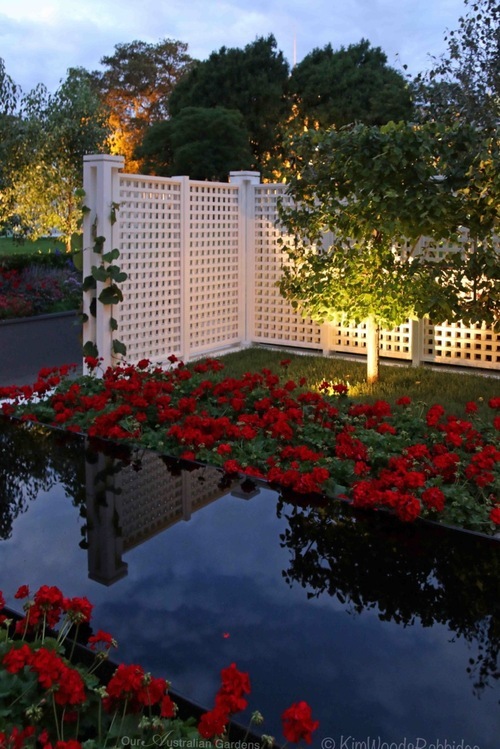 For the first time, high-profile Melbourne designer Paul Bangay graced MIFGS with one of his designs – also a Gold Show Garden.  Built by Conway Landscaping, the garden was classic Bangay with a contemporary twist – hence the title ‘Tension’.

A hedge of Magnolia grandiflora ‘Teddy Bear’ stood tall behind hydrangeas, ripples of clipped buxus, and ground covers.  Central to the design, a verdigris garden pod overlooking the striated fountain, pond and circular bed had organic, convex walls and roof.

Paving reinforces the circularity of the central bed, while horizontal pavers draw the eye across the site.

Touches such as the pendant lamp, stools, and the striated stone fountain reflected the attention to detail that cloaked a seemingly simple design in elegance.

One of the brilliant  Silver Show Gardens was ‘The Garden Cornucopia’ designed byEckersley Garden Architecture and constructed by HScapes.

in a collaboration with Australian House & Garden eGA sought to ‘create a surreal and enchanted garden space’ – and in our view their brief was achieved – superbly. 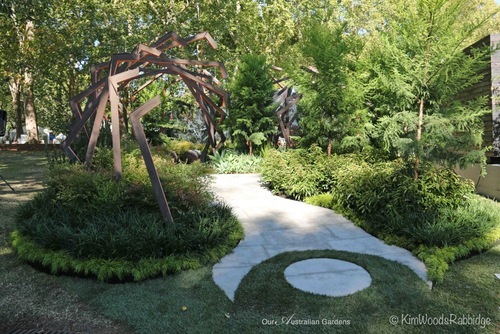 The experience for visitors was enhanced by an invitation to move through the site – first along an open pathway bordered by informal plantings of agave and nandina. 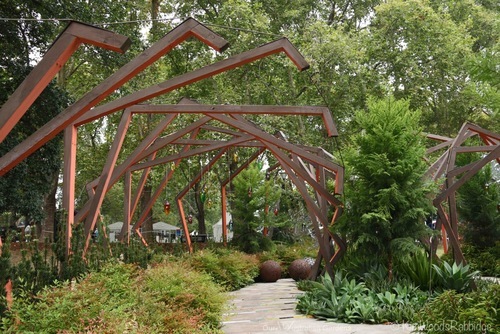 Lines of coloured tiles were appealing junctions along the pathway. 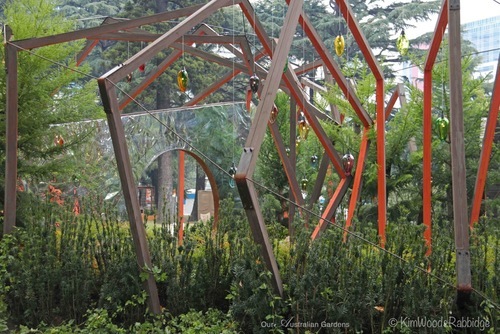 At the far end a moon gate and a reflective wall was a contrast to the angular beams – some said it was discordant.

I loved the surprise – and especially the light play it produced as the sun moved over Carlton Gardens.

We’ll bring you more MIFGS designer gardens in our next blog – hope you enjoyed these.